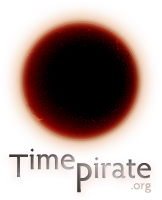 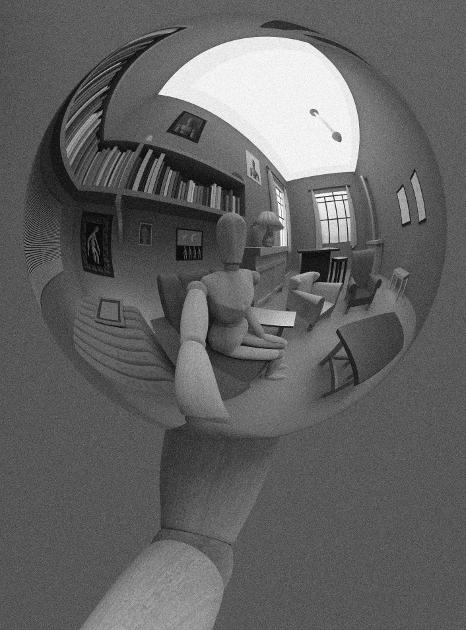 I made this "scene" in Blender, re-creating the room from what I could see in the original Escher drawing, placing my camera at the right spot and taking the picture.

So it was fun and I share it for your enjoyment.

What was really intriguing was that I found one of the objects in the original is "impossible". In other words, to reproduce the object in the reflection properly, I had to distort it a LOT. Everything else could be constructed just as you would expect and they all reflect correctly.

Try to guess which object I'm talking about. I'll tell you in a minute.

So this raises the question did Escher purposely draw this object wrong or did he make a mistake? Is it maybe a small Escher joke? Have I discovered something that was unknown before??

It is the table on the lower right of the ball. When you build a regular table and place it in the right position the reflection looks nothing like what Escher drew. I have a link to a "making of" pic if anyone is interested, but the problem is the legs in the rear can in no way be seen and the upper edge bends the wrong way. So to properly re-create Escher's drawing I had to piece by piece distort the table and wonk the legs.

Below I have posted a series of "Making Of" photos, alternate angles and some surprises. I also have an "un-wonked" table so you can see how a "proper" table reflects.

"Sharp" means it is in full detail and crystal clear and crisp. "Shaded" means I've applied some "noise" to make it appear pencil drawing like. "Hard", when they are available, is strong effects to make it have a similar texture to a drawing in the style of the Escher original. 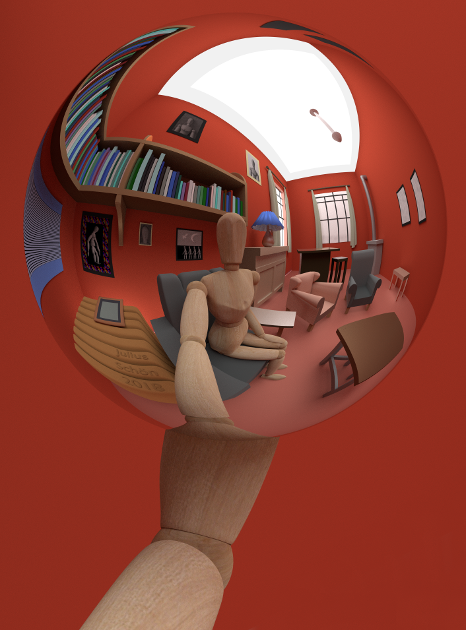 Here is a Larger version (opens in new tab/window, it may fit itself into the window in which case simply click it to enlarge): Sharp, color 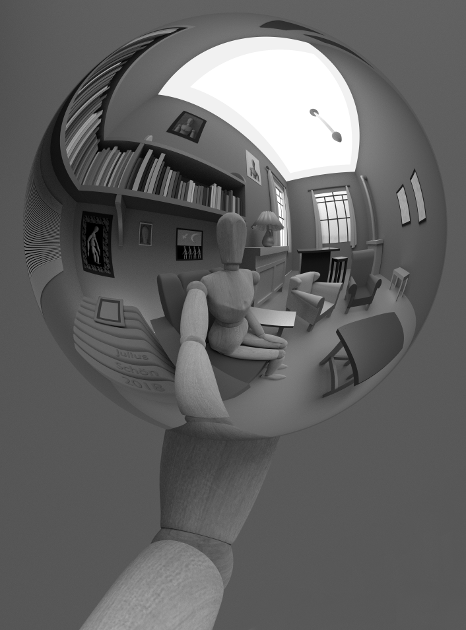 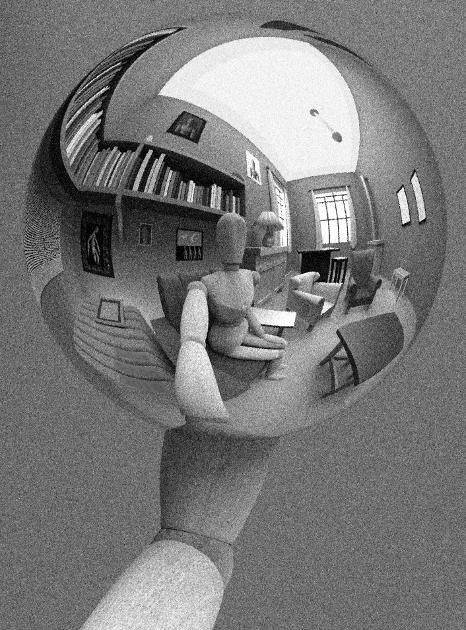 Below is the "'Un-Wonky" table version. That is, the more accurate versions above use the seriously distorted table I had to make to make the recreation accurate. The version below uses a completely "normal" table (rectangular, legs at corners). Note the difference in how the recreation looks with a normal table! Crazy! So did Escher do it purposely? Who knows. You can see the actual "making of" pictures of how the tables are constructed later. 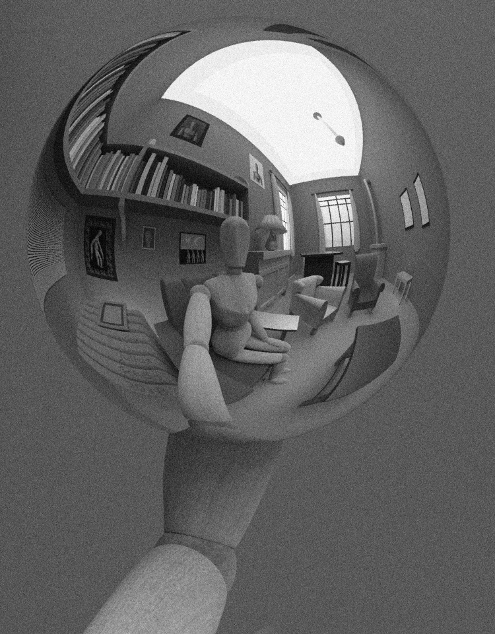 ===From above the Ball 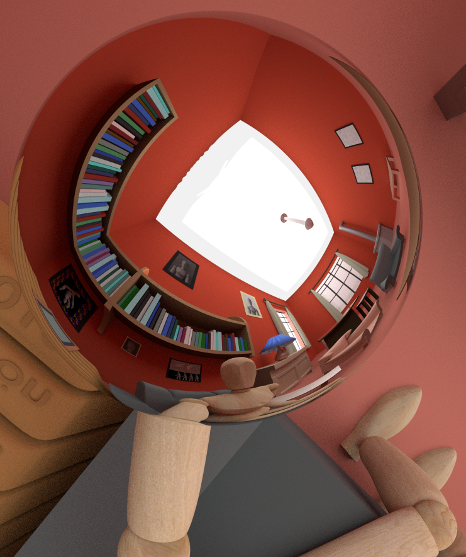 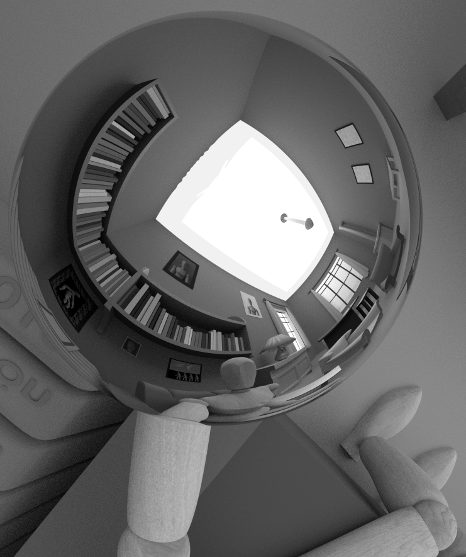 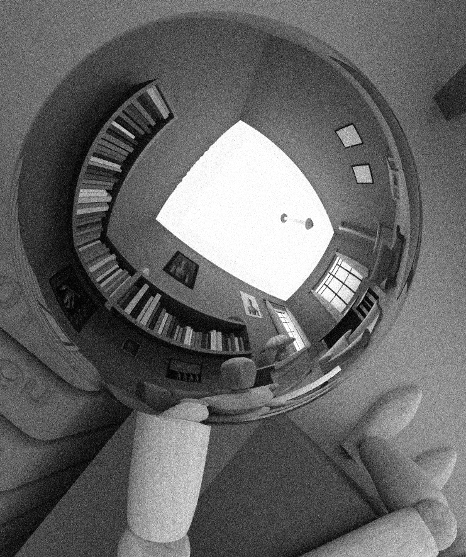 ===From the side of the Ball 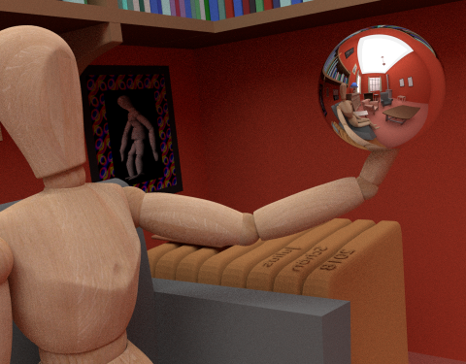 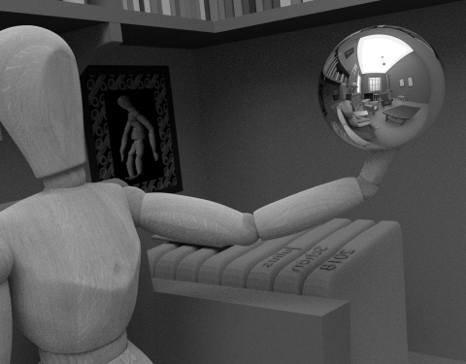 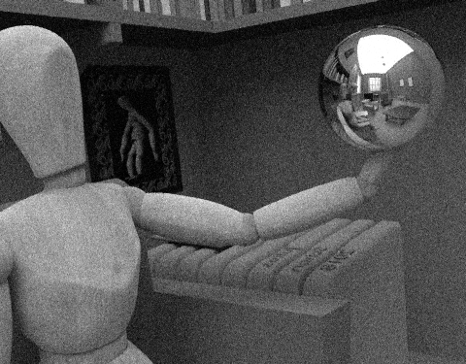 ===From under the Ball 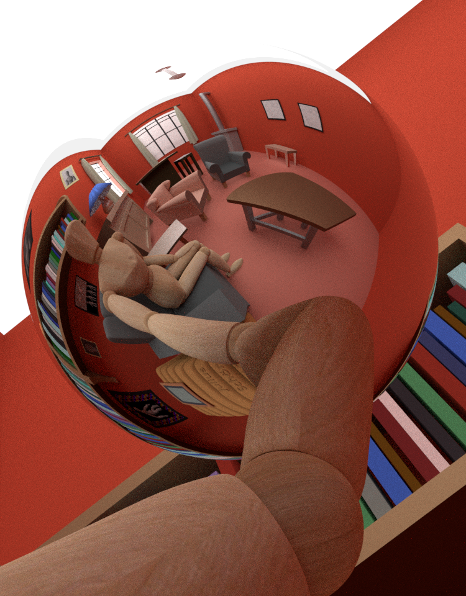 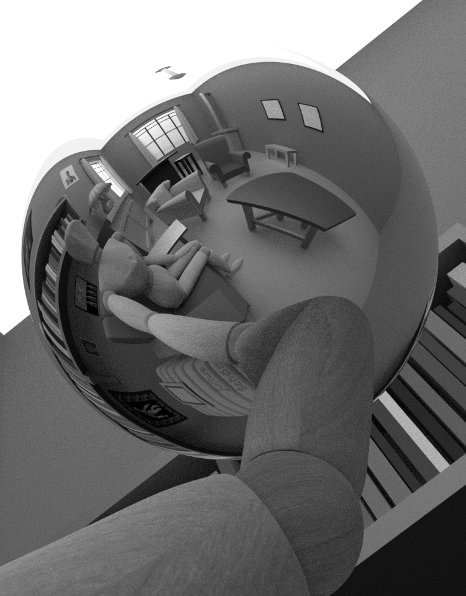 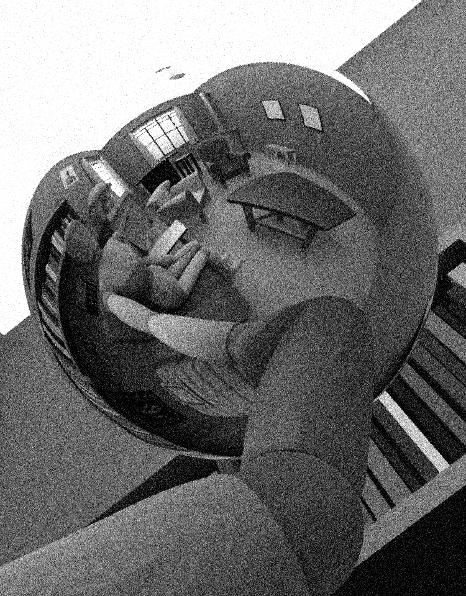 ===From The other side of the Ball 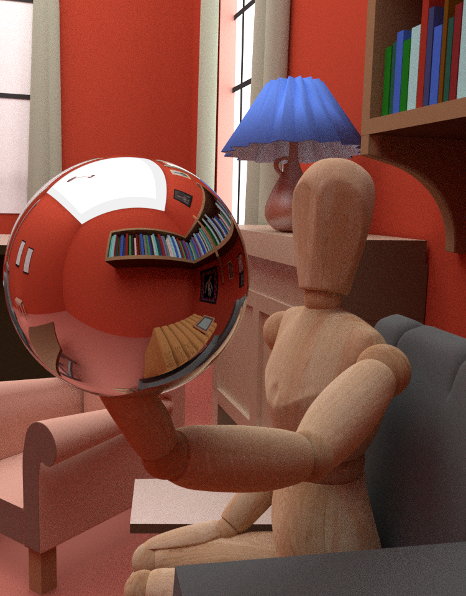 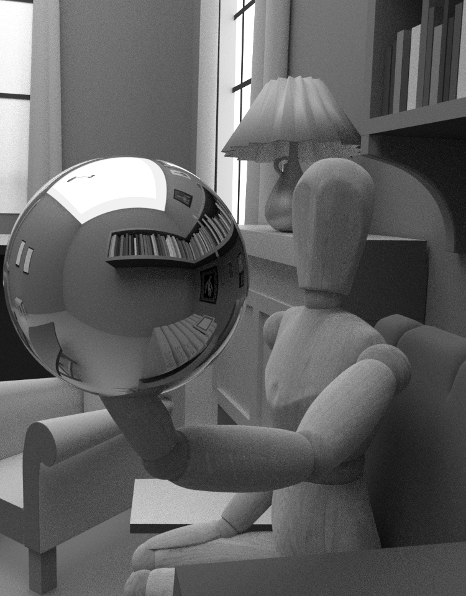 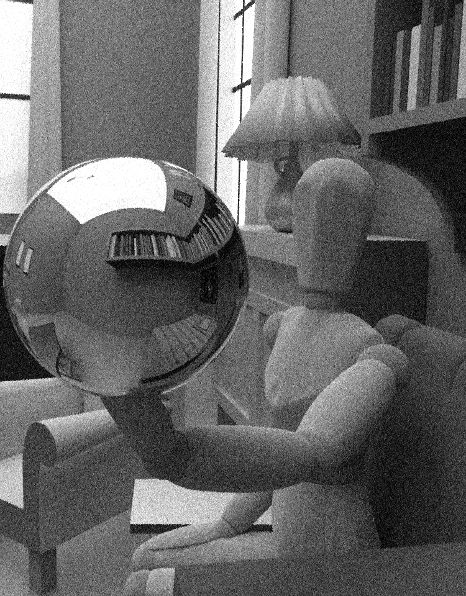 So now, here are some links to the "Making Of" the M. C. "Bob" Escher Ball. These are camera angles from around the "room" I made in Blender so you can see how everything relates to everything else. Yes, yes, the colors are strange, but since I wanted to make the "final" pictures in Black and White, like Escher's drawing, I needed to use colors that would go to B&W with the same shades of grey.

Keep an eye out for the distorted table across from Bob's knees. 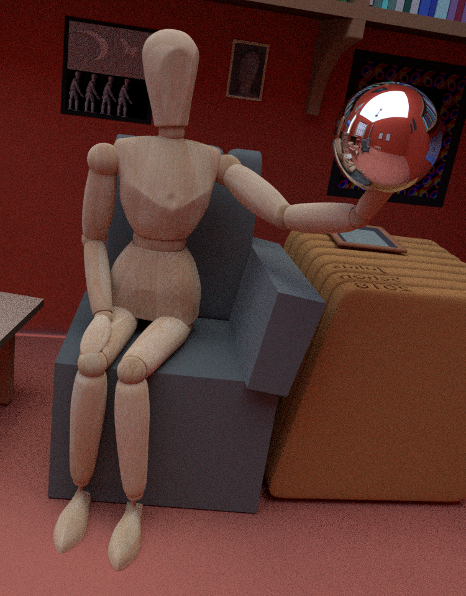 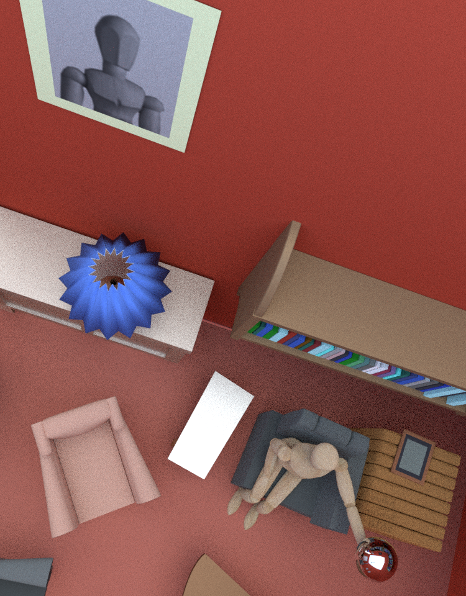 Fly on the Wall: Larger Version 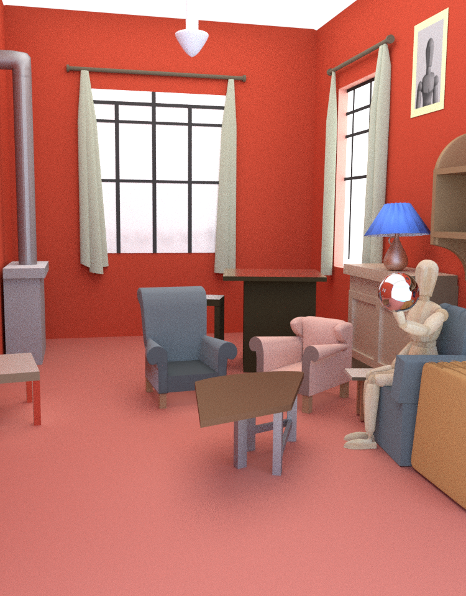 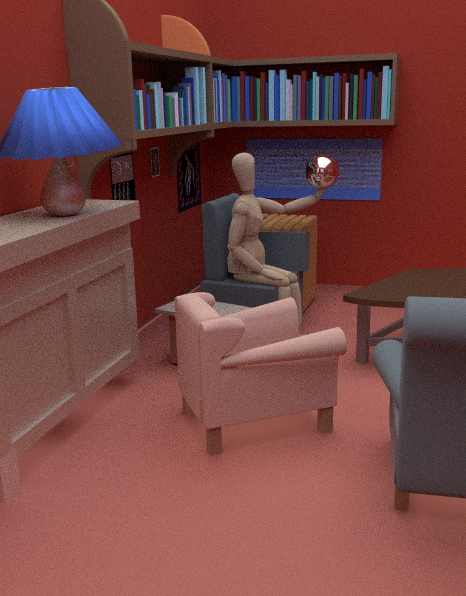 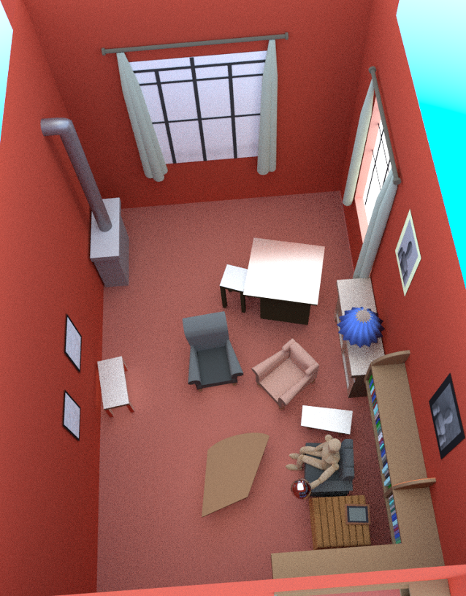 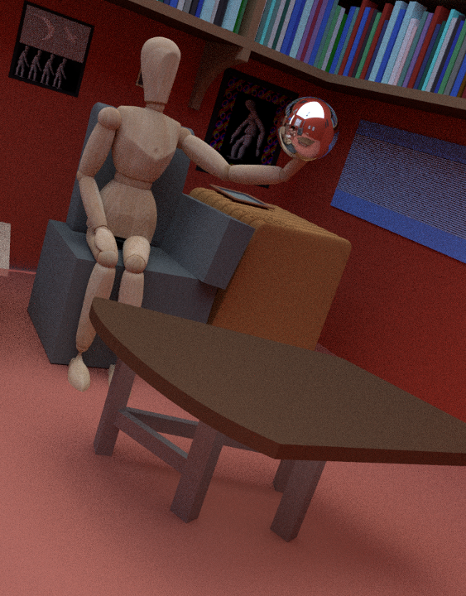 Wondy Table, see how distorted it needed to be? 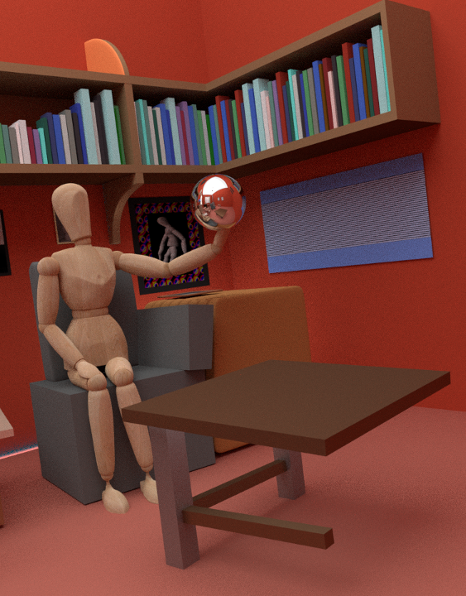 Regular table, but doesn't reflect like properly for the recreation. Krazy.

Here is a view of the drawing using a Disco Ball 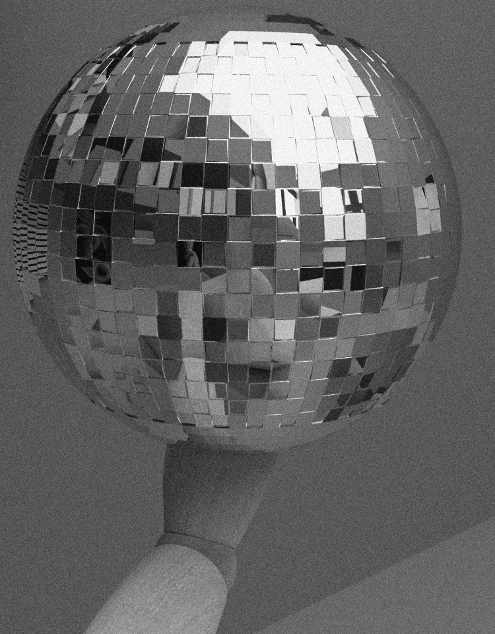 And here are homages to the movie "The Matrix": 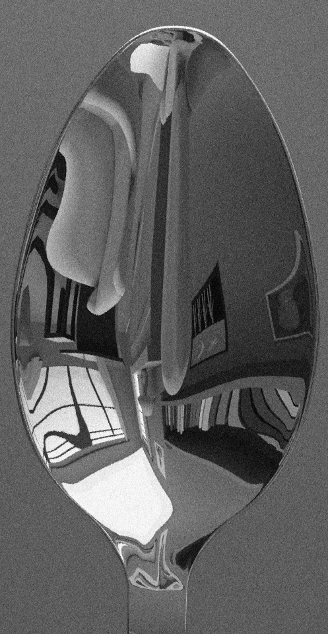 Escher drawing using a spoon, round side 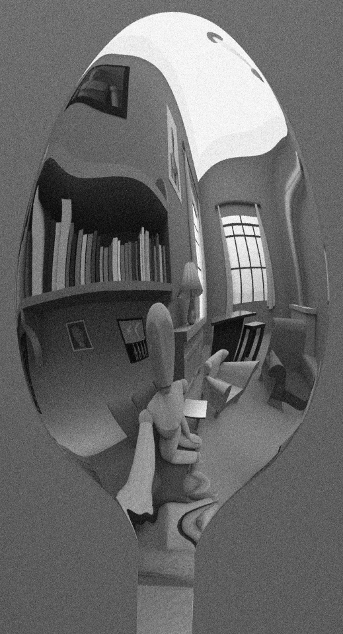 Round side: Larger Version

And who could forget that scene in The Matrix where Neo bends the spoon? Two movies that re-create the spoon bending scene.